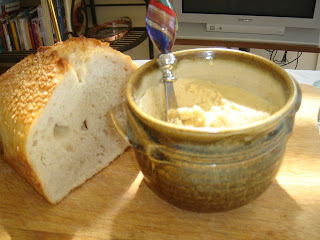 This is based on Matthew Evans recipe as published in the Feast Magazine. We ate it on home made sour dough bread, but any home made, TMX, bread would be suitable. Just toast one side and spread the mixture on the un toasted side , then grill. If you top it with a poached egg, it is called Welsh Buck. Dobs on a Pizza with char grilled egg plant, olives and capsicum would be great. Also spread over bread dough with sun dried toms and olives, then rolled up and cut into rolls would make a very nice savory roll to have with soup. No more buying Kraft Cheese Spread.!!!

200g of tasty cheese
50 g. of Parmesan cheese
2 Tablespoons of Pale Ale, ( could use milk or cream)
2/3 teaspoons of Dijon mustard, ( or any that you have)
1 Tablespoon of butter
1 pinch of cayenne pepper
1 teaspoon of Worcestershire sauce
4 slabs of bread

Grate cheeses in TMX.
Add all ingredients, except bread, cook 5 mins/ 90 o /speed 2.
Pour into a container, and it will set up into a soft paste as it cools.
Spread on bread that has been toasted on one side, then grill.

You can fiddle with the ingredients to get the taste you like.
It did leave a slight residue on the base of the TMX, but was easily removed.
Posted by elizabeth at 7:01 PM

This looks delish! Thanks, I'll definitely make this one.