This recipe was originally from Dorrie Greenspan.  It was changed slightly by FOOD52 ,  and then adapted to TMX by me.   I also doubled the recipe as I found that they stayed crisp for more than a week.

Method
Mix sugar and eggs in TMX for 30 seconds, speed 4. ( or beat with whisk until incorporated )
Place almonds into a dish and pour on the egg mixture.
Gently mix.
Spread 2 teaspoonful mounds on trays.   spread with a fork until flat but without spaces between almonds.
Bake 20 minutes.  Sit tray on wore rack to cool.
Remove from tray with flat spatula
If sticky when cool, turn over and place back in oven for 10 minutes.
spore in air tight tin. 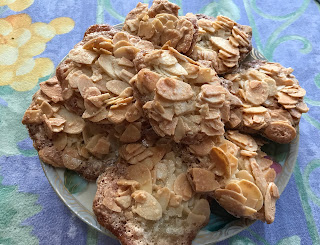