This recipe was given to me by a neighbour. They are the only biscuits her 98 year old Mother in Law ever made.  She said she had no idea why they were called surprise.   After making them several times, I think I know.  To the basic recipe, you can add almost anything.  What a surprise. ,!
These are , left, Peanut butter, right, Chocolate with added chocolate chips. 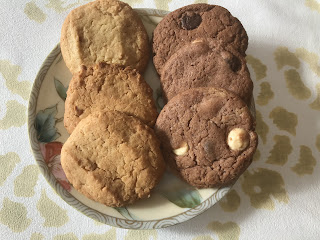 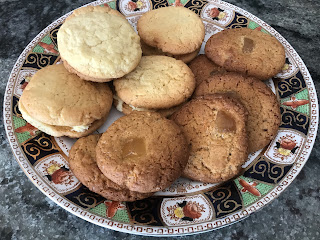 These are Monte Carlo and Choc Chip.
Posted by elizabeth at 6:59 PM No comments: 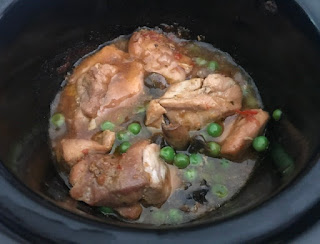 Flavour Bombs are intensely flavour pastes and sauces that can be frozen and added to Chicken, Pork, Beef, Veal or Tofu.
They can be added to food to be cooked in Slow Cookers( Crock Pots), Tray Bakes, TMX or Casserole dish in oven.
Make in bulk and freeze according to number of serves.
As I test more generic flavours, I will add to the list.
Number 1, a simple Bomb
This makes enough for 4 large serves, ( I used 1/2 to make 2 serves)

Add Chicken Thighs ( trimmed and cut in half) to Slow Cooker, add paste and stir. ( no liquid)
Turn pot on and select slow, medium or high , depending what suits your time frame.
Add mushrooms when chicken is nearly  cooked and peas when cooked.
Thicken with 2 teaspoons of Cornflour mixed with a little water.  .

Serve with rice or mashed potato. 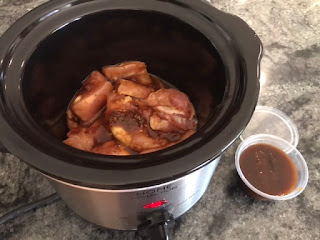 Flavour Bomb 2. A High Octane Bomb, used 3 ways.
Basic flavours with the addition of either, Stock Or Tomato Or Coconut milk. OR a mixture of liquids.  You decide. 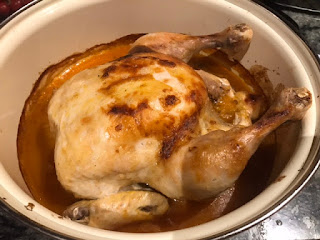 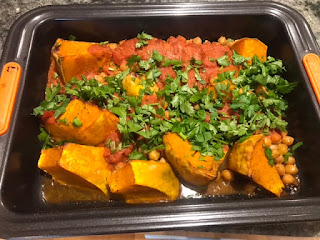 This vegetarian tray bake of Pumpkin has a Flavour Bomb and Diced Tomato added. Sweet potato, Carrot, Zucchini or Eggplant, or a mixture would be equally nice. I added chick peas and Meredith Feta.

Zest and juice of a large fresh lime. 2 limes if small.

Mix all together and place in a small Zip lock bag. Freeze.

Examples.
1 large Chicken, 1/2 Flavour Bomb, 1 tin of Coconut milk, 1 cup of stock.
Place chicken in baking pot with lid, pour mixed ingredients and bake covered 30 minutes. Hot oven.
Remove lid , baste and cook for further 30 minutes brown chicken.
Serve with carb of choice and green veggies or salad.
Note
Because I used Organic Coconut milk it had the cream floating on top. I put the Flavour Bomb, coconut milk and stock in the TMX and cooked it at 100 degrees/ 10 minutes/ speed 2.
Then tipped over the chicken.
When cooked this will produce a mild flavoured sauce.  Do a taste test and if a stronger flavour is required, stir a bit more of the FB in.

Baked Pumpkin. Tray Bake
Chunks of pumpkin ( or other veggies ) pre roasted until nearly cooked.
Mix together  1/2 Flavour Bomb (  or less depending on quantity of veggies) with 1 tin of diced tomatoes and 1/2 tin stock.
Pour over veggies and bake until fully cooked. .
OR
Mix raw veggies with FB and tomato mixture, cover with foil and bake until cooked.  Uncover and brown under grill.
Note
I added a tin of chick peas to dish and served with Meredith Feta.


Posted by elizabeth at 8:03 PM No comments: 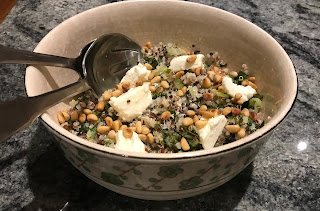 I have a very large Chinese Cabbage ( Wombok) that is a bit moth/grub eaten.  I don’t want to waste it is truly organic.  FOOD52 had a recipe for ‘One Pot Kale & Quinoa Pilaf’, that could be adapted to suit my purpose.

I converted the recipe to TMX and made a smaller amount.
The recipe as presented makes 4 serves as a side.

Instructions
Mix oil, Lemon, onion tops, in serving dish and set aside.
Place 1 litre of water into TMX bowl and place basket with Quinoa into bowl.
Depending on what greens are used, separate stalks from leaves.
Set greens aside except for Kale.

When steamed, mix greens through Quinoa and tip onto oil mix in serving dish.
Fold together and serve with Pine nuts and feta on top.

Can be served cold or at room temperature.  Adding Pine nuts and Feta just before serving. 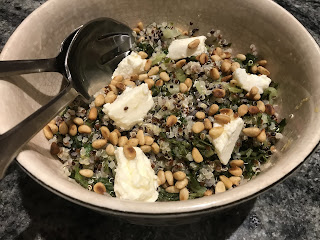 Posted by elizabeth at 12:09 AM No comments:

I love my Kefir.  It is so easy to make and carries so many good bacteria. The problem is that I don’t want to heat it as this will kill most of the good bacteria. I have made Lemon Icecream which is lovely.  What else?
When I saw a recipe for frozen yoghurt bark I thought I could probably make same with thick Kefir. if your Kefir is thin you may have to strain it .  You can use several layers of Chux, a Jelly bag or cheesecloth.
Spread the Kefir into baking paper placed on a flat tray that will fit Flat into your freezer. 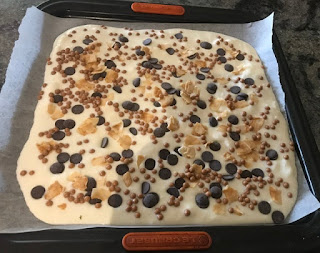 The additions are up to you.
I used dark chocolate , ginger infused coconut flakes and caramel balls.
When ready, freeze.  Serve while frozen or partially defrosted.
I will cut into 16.
Posted by elizabeth at 11:04 PM No comments: 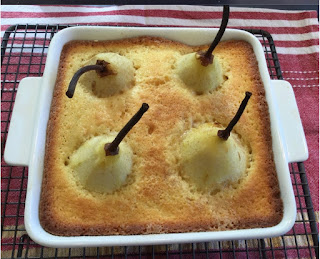 The directions for this delightful pudding are available on Forumthermomix.
Posted by elizabeth at 6:22 PM No comments:

This recipe is particularly suited to the TMX, but could be made in a machine that will slice the Broccoli into rice and then another that steams.
I am dressing it with lemon juice , salt and pepper and serving it as a base for kababs.
As a side , 4 serves,
Ingredients
60 g Quinoa
100g Broccoli florets 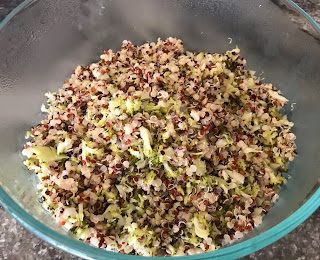 Posted by elizabeth at 11:15 PM No comments:

Bread rolls, mixed in TMX and baked in Air Fryer

In 2014 I posted a recipe for bread rolls mixed in TMX and cooked in an Air Fryer. I have recently bought another Philips Air Fryer.  This later model is manual and hotter than the previous one which was digital.
Testing for the original recipe, it proved simpler. Using 1/2 No Fuss bread recipe. Rise until double. Form into 6 rolls.
Rise in pan that will fit into basket of AF.
Temperature setting 160 degrees.
Bake from cold, 7 minutes. ( I used a timer )
Turn over rolls.
Bake 7 minutes. 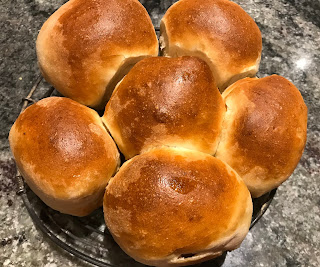 Posted by elizabeth at 1:48 PM No comments: