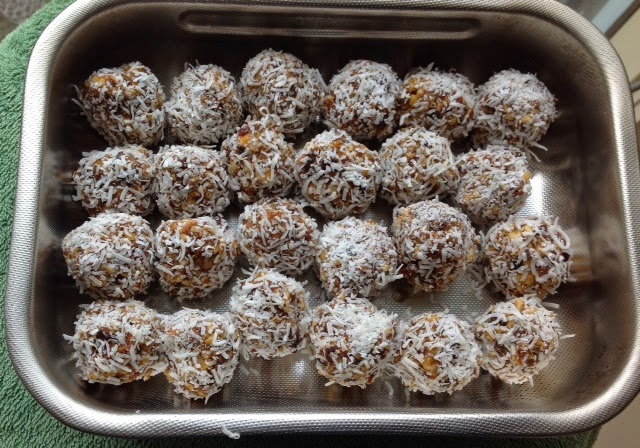 Wow,  these were posted in today's Age Newspaper,  recipe by Nicole Avery. .  I have adapted them to the TMX and changed the ingredients to suit our taste and to what I had available.  made 30 , 4 cm balls.

Ingredients
3/4 cup chopped carrot
2 cups almonds
2 cups dates, cut in half to see that there were no stones.
3/4 flaked coconut
3/4 cup if dried fruit,  I used a mix of Apple, Apricot and pear.  The original recipe calls for dried Pineapple.
1 dessertspoon of Cinnamon powder. ( original recipe used double this amount )
1/2 cup of desiccated coconut extra to roll balls.

Method
Place carrot into TMX bowl and cut 2 seconds/ speed 5.
Place remaining ingredients into TMX bowl, except extra coconut, and Turbo for 4 seconds 3 times.
Continue to mix on speed 7 until the mixture easily clumps when pressed in your hand.  Keep mixing and testing.  Don't mix until you have a paste.   There should be some texture.

I used a 4 cm Ice cream scoop to form balls, then roll into coconut.
Place in container in fridge to firm up.
Can be frozen.
Posted by elizabeth at 11:32 PM