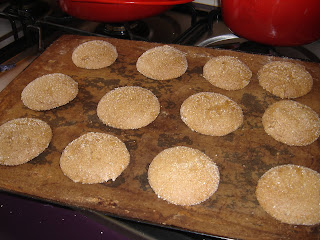 
David Lebovitz developed these biscuits after tasting a similar one in a cafe. I have modified the recipe for the TMX.

Additional 3/4 cup of white sugar with a good pinch of cinnamon.

Chill mix for at least 30 mins. Heat oven to 180c.
( I used FF as my oven is a bit on the cool side.)
Roll into balls the size of an unshelled walnut. Roll in the additional sugar mix.
Allow room to spread.(12 to a tray)
Cook for 13 mins, or until the top is just set.
These biscuits have a crisp outside and soft inside.
Cool on rack.
Can be iced with thick lemon icing.
Made 27 biscuits
Posted by elizabeth at 7:41 PM

Missed this one - they sound yummy too. Gingernuts are always delicious, but with crystallised ginger too. Yummo