I wanted to create a spread that had an intense burst of flavour.  I first tried Quinces with chia seeds but it was a bit flat.  I then reconstituted some Australian dried Apricots and added them to the Quince pulp.  Bingo ! This did the trick.

6 large Quinces,, Wash and rub off fuzz.  Leave skin and cores in. and cut in to quarters.

Place in a slow cooker and cover with water. Cook on high until soft.

Save liquid and pulp in separate containers, Set aside

Weigh out 200 grams of dried Australian Apricots, ( these have more flavour than the Turkish ones)

Cover these with the quince liquid that was set aside. ( I used 300 grams of liquid)

Microwave in a large bowl , covered, for 10 minutes.

Add, cooked Apricots and liquid to TMX bowl with 500 gams of Quince pieces

( there will be some texture remaining.)

Decant into sterile jars and when cool refrigerate. Will keep for 2 weeks. 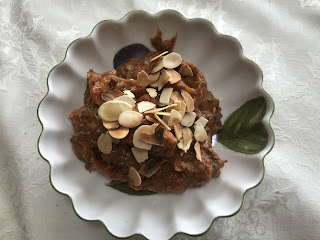 Total amount, and that’s a lot

Used some to fill baked apples.

Mix with Balsamic vinegar to brush Duck breasts prior to baking .

Posted by elizabeth at 3:11 AM